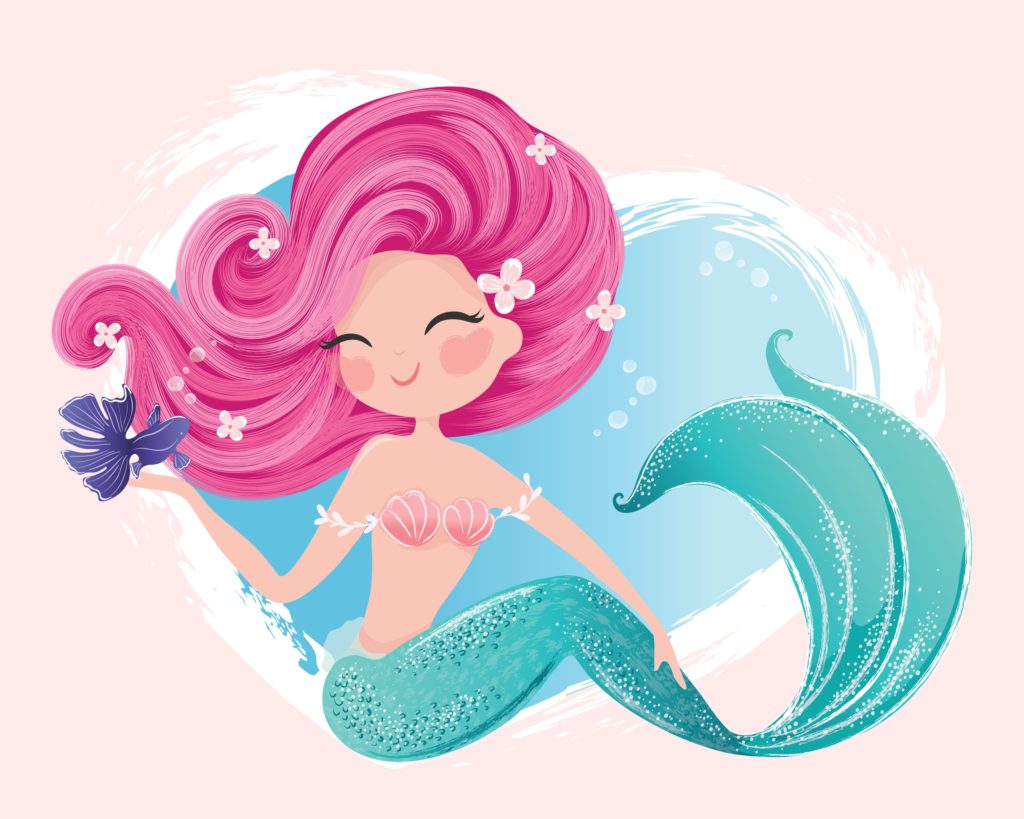 Stories of mermaids have been around for years. It wasn’t until Disney released “The Little Mermaid” that these creatures became more famous and well-known.

Pay homage to Disney and Hans Christian Andersen’s “The Little Mermaid” by decorating a girl’s bathroom with a mermaid shower curtain. Make sure to add plenty of seashells and blue to create an underwater scene.

A mermaid swims deeper into the ocean, with just her tail showing in this shower curtain. Scales sparkling in blue and purple cover the lower part of her body. Blue and purple sea plants emerge from the bottom of the ocean.

This shower curtain will look great in a little girl’s bathroom. Sealife and seashells float behind the mermaid’s tail, where blue waves ripple on the surface of the ocean.

Add silver hooks with mermaids to the shower curtains, hang up mermaid pictures on the wall, along with other mermaid and ocean décor.

Place this shower curtain in your girl’s bathroom for her to enjoy. The shower curtain is decorated in scales that are in shades of pink, turquoise, and purple. Each scale is outlined in black to make them stand out.

Add mermaid-themed pictures to the wall, with seashells on the countertop and shelves. Hang the curtain with the included white hooks, or purchase silver hooks with mermaids to decorate the curtains with.

This shower curtain is made of 100% polyester and is waterproof. When dirty, you can clean it in the washing machine so that it can be enjoyed for a long time.

A little girl will love having this mermaid-themed shower curtain in her bathroom. A mermaid’s tail flops upward in shades of turquoise, blue, purple, and pink. Seashells in similar colors float on top of waves in purple and pink.

The soft watercolors on this shower curtain will add color to any bathroom. “Salty Air and Mermaid Vibes” are handwritten in purple and teal. White outlines on the waves and mermaid’s scales brighten up the scene.

Add towels and bath mats in similar colors to the bathroom. You can find towels with mermaid scales to match, or find ones in solid-colors.

The beautiful scene on this shower curtain looks like stained glass with colors and images outlined in black. Two mermaids sit on rocks while fish and other sea life swim by. Sunlight can be seen coming through the water at the top, brighten up the middle part of this underwater scene.

Add this shower curtain to a guest or girl’s bathroom. Find towels in blues and tans to hang on hooks, as well as bath mats in similar colors. Decorate the walls with images of the ocean and mermaids in similar colors to match.

Enjoy a beautiful piece of art in your bathroom with this mermaid shower curtain. This shower curtain shows a mermaid sitting on a rock, looking wistfully at a ship out in the ocean. She has a crown of white flowers in her blond hair.

The mermaid’s top hangs down from the seawater all over it. The dark rocks shade her tail from the sun. The scene looks peaceful with the sun rising behind the ship off in the distance.

A mermaid-loving little girl will love this mermaid-themed shower curtain. A young mermaid smiles as her red hair flows around her in the ocean water. She grasps her green tail as colorful fish swim around her.

The blue water is surrounded by a light-pink border to complete this colorful shower curtain. Add a matching bath mat with the same picture to the floor near the tub and shower. Find towels in similar colors to hang on hooks as well.

This shower curtain will go great in a guest or young girl’s bathroom. The silhouette of a female mermaid painted in teal watercolors is in the center of this shower curtain. She is surrounded by purple and green bubbles.

The ocean in the background is painted in soft pink, blue, and turquoise. Add similar colors throughout the bathroom with bath mats and towels. Purchase watercolor art prints with similar images to hang on the walls.

This shower curtain is easy to install by hanging it on the metal hooks that come with the curtain.

A blue tail of a mermaid takes up most of the space on this shower curtain. A mermaid appears to swim away from view, with the tip of her blue and pink tail flicking its way through the ocean water. “Bathe like a mermaid” is printed in block and cursive letters in yellow and blue.

A mermaid holds a skull, surrounded by blackness with stars shimmering around her. Her hair swirls behind her with seashells and a crown. The mermaid’s detailed tail is covered in tiny scales.

Add black and white towels and mats, or more colorful ones with seashells and mermaid designs.

A mermaid-loving girl will enjoy having this shower curtain in her bathroom. A mermaid swims around pink, cream, and blue seaweed and starfish. The mermaid’s hair flows around her in shades of pink and blue, with her blue tail swishing behind her.

Add silver hooks decorated with mermaids as extra décor on the shower. Hang up pink and blue towels and find a pink and blue mat to place on the floor to match.

Ariel, the Little Mermaid, happily swims around with her best friend, Flounder. Beautiful and colorful sea plants grow beneath Ariel and Flounder. A road leading to the royal palace in the background can be seen surrounded by the blue water of the ocean.

Place this in your little mermaid’s bathroom for her to enjoy. Add Little Mermaid accessories, towels, and a bathmat to match with the shower curtain.

This shower curtain shows a mermaid swimming in a sea of pastel colors and plants. Pink and cream coral emerge from both sides, with colorful seashells nestled in the sand. The mermaid swims around this scene, her pink and blue hair trailing behind her.

Add a matching bath mat with the same or similar scene, and towels that are light blue and pink. Decorate the walls with other ocean and mermaid scenes to match with the shower curtain.

Vintage and mermaid lovers will enjoy having this shower curtain in their bathroom. A vintage scene of a mermaid emerging from the ocean can be seen on this shower curtain. The mermaid stands on a wave of fish to watch a seagull fly by with a yellow flower in its beak.

Add décor and accessories in similar colors and design. Hang up tan and pink towels. Place a blue mat on the ground to mimic the ocean water.

This shower curtain filled with colorful mermaid scales will look great in a girl’s bathroom. Scales painted in shades of pink, purple, blue and teal with watercolor decorate this shower curtain. Each scale is outlined in gold for a sparkly look.

A young mermaid shows her unicorn catfish friend a beautiful pearl in this shower curtain. Shells lay on the ocean floor with seaweed growing upward. The mermaid’s pink hair flows up then down as she shows her colorful catfish friend a sparkling pearl in a shell.

Add a matching rug with the same scene to the floor of your little girl’s bathroom. You can also purchase colorful mermaid wall decals for your child to decorate the walls of their bathroom with.

This vintage print shows a mermaid sitting on a rock, combing her blue and black hair. She rests her tail on the sandy shore as she looks back at a yellow fish swimming to the surface of the ocean to greet her.

Decorate the walls with other vintage prints of mermaids and the ocean. Add blue and yellow towels and bath mats to complete the look of your updated bathroom.

Decorate the walls of your bathroom with ocean art in similar colors. Place a blue mat on the floor and blue and white towels on hooks to use.

A mermaid silhouette can be seen against an ocean background created with blue and green watercolors. The word “mermaid” is handwritten in white at the bottom, with the white mermaid swimming in the center of the ocean.

Add other images of mermaids to the walls and countertop, with matching towels and bathmats on the floor to complete the look.